How's this for a great recipe -- use environment toxins to improve energy efficiency?

Start with two chemicals, each of which is a noxious industrial byproduct. Combine. Package resulting liquid in eight-ounce bottles. Slap PowerShot on the label. Sell for $4.95 a pop. Put in gas tank.

"When added at same time you fill your car up with gasoline, PowerShot can boost octane, and improve gas mileage from between 5 to 15 percent," said Jacqueline Coates, one of four students in Duke's Masters of Engineering Management program who developed a business plan for developing and marketing this novel green product. "Ethanol, the latest gasoline additive to gasoline, has reduced miles per gallon by up to 20 percent. We believe there is a better solution." 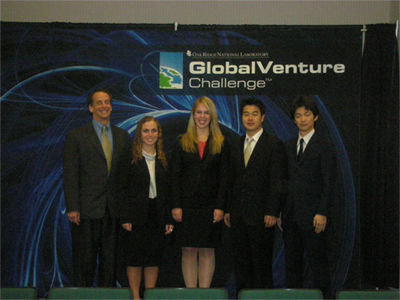 The group's business plan for the start-up recently placed third in the Global Venture Challenge Idea-to-Product competition held annually at the Oak Ridge National Laboratory in Tennessee. The team, which was judged by a panel of energy executives, venture capitalists, technologists, entrepreneurs and lawyers, won $5,000. The event is sponsored by the U.S. Department of Energy and UT-Batelle.

"We presented our plan three times – in a practice round, the semi-finals and finals," Knish said of the Oak Ridge competition. "It was a great experience because we got extremely helpful feedback and learned a lot about everything involved in creating a business, as well as important tips for pitching new ideas."

The project began in last spring's Intellectual Property Asset Management class, when the students were intrigued that the PowerShot idea presented to them by student advicor Grune could become a viable company. The team has since been studying the technology involved in creating the product, researching any potential intellectual property issues and developing the business and marketing plan.

"After lead was removed as an octane-booster from gasoline mid-90s, other additives were added to increase octane, such as MTBE (methyl tert butyl ether), which has environmental issues, or more recently ethanol," said Coates. "Our additive, which will be sold over the counter, increases miles per gallon and could save as much as 50 cents per gallon at the pump. It's also easier on the engine than ethanol."

Chemically, PowerShot is glycerol tert butyl ether (GTBE), which is made by combining two chemicals. The first is crude glycerol, a byproduct of the production of biodiesel which is normally sent to landfills. The second is isobutylene, a byproduct of petroleum refining.

"It is the first and only renewable, green biomass-derived biofuel additive to date," Knish added. "The entire process can be handled domestically, and the additive should help any grade of gasoline or diesel."

The company plans to spend 2009 raising money, lining up retailers and sponsors, as well as forging partnerships with distributors. The team envisages the company beginning manufacturing PowerShot in 2009 and being profitable after its first full year of sales.