Half of Americans See Other Country as Technological Leader

DURHAM, N.C. -– Half of all Americans expect another country to emerge this century as the world's leader in addressing technological challenges that range from the economy to global warming, according to a survey of U.S. public opinion released March 3 by Duke University.

Although only 34 percent of Americans gave themselves a grade of A or B for understanding "the world of engineers and what they do," 72 percent nonetheless expect the technological advancements of the 21st century to surpass those of the previous century. However, only 49 percent predict the United States will lead the way in producing these advances, according to the survey of 808 adults carried out Jan. 22-25 by Hart Research Associates.

Duke's Pratt School of Engineering commissioned the survey, Americans Attitudes Toward Engineering and Engineering Challenges, for a national summit on engineering "grand challenges" it is co-hosting March 2-3 in Durham.

Americans with more education are even less optimistic about the likelihood the United States will be the world's technological leader in the 21st century. China was cited by 20 percent of all the respondents as being most likely to assume this position, followed by Japan and Europe at 10 percent each, and India at 4 percent. Americans were just as likely to say their country's ability to compete technologically over the past century has worsened as to say it has improved.

Among those who see a decline in America's ability to compete technologically, 55 percent say the situation is temporary and 39 percent say it is long term.

Americans understand that innovation is critical to their future, but also recognize that our country's continued leadership isn't assured just because we invented everything from the airplane to the personal computer, said Thomas Katsouleas, dean of the Pratt School. The survey shows that when Americans focus on how central engineers are to solving our biggest problems, they come to view the discipline as essential and want to attract more talented young people to it. 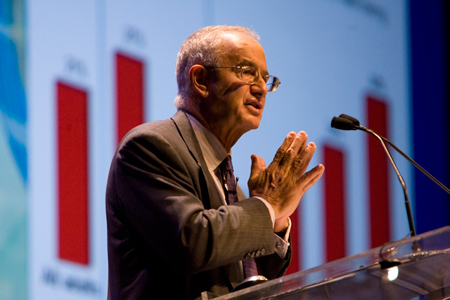 In response to a list of major engineering challenges facing the world, those surveyed gave highest priority to developing better medicines, providing clean water around the world and developing environmentally friendly power sources. They gave less priority to securing cyberspace against attacks or to restoring and improving deteriorating urban infrastructures.

The respondents said the best ways to improve U.S. global competitiveness are with more training for workers, improved K-12 math and science teaching, and tougher standards for public school teachers and students. They were much less likely to endorse tax breaks for business and investment, or new immigration policies to attract foreign engineers and other technical experts.

A majority of the respondents -- 58 percent -- said engineering is losing out to other professions when it comes to young people choosing careers. They said this is happening because engineering does not pay as much as other fields, requires extensive schooling and is seen as being difficult. "Not as glamorous" was cited least often among seven possible answers in explaining why engineering has been a less attractive career choice.

Katsouleas released the survey results Tuesday morning during the two-day summit Duke is hosting with the University of Southern California Viterbi School of Engineering and Olin College. More than 1,000 people registered for the event, which is bringing together "leading engineering, science, humanities and social science scholars from across the nation" to discuss a series of societal "grand challenges" laid out by the National Academy of Engineering.