MEM Student Brings Many Talents to the Entrepreneurial World

Legions of genetically souped-up silkworms could someday produce a substance that more effectively protects troops in battle at less than half the weight of current body armor.

It has been long known that the silk spun by spiders is remarkably strong and flexible. However, the main challenge to date in harnessing this natural wonder is the difficulty in lining enough spiders to produce high quantities of silk.

That's where the silkworms come in.

Scientists have developed a way to take the spider gene responsible for silk production and to insert it into the genetic make-up of the common silkworm, creating a virtually limitless supply of spider-silk producing worms. The worms spin the silk around themselves, creating cocoons that resemble fuzzy white grapes.

Once the worm has finished spinning his silky cocoon, the bundle is heated (alas killing the worm) to harvest the silk. Then, the new silk can be spun on existing equipment into almost any shape or configuration. 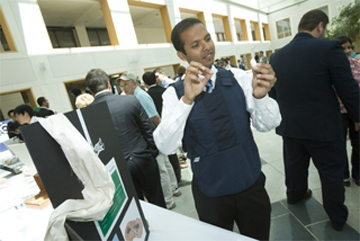 The technology driving this new approach to silk production belongs to a start-up company called EntoGenetics, which was the overall winner at the recent Duke Start-Up Challenge. A member of that team is Gautham Pandiyan, an energetic and entrepreneurial student in Duke's Master of Engineering Management (MEM) program. As an EntoGenetics business development associate, he is involved in grant writing, fundraising from investors and business plan development.

"The silk is five times stronger than steel and twice as strong as Kevlar, the currently used material in bullet-proof vests," Pandiyan explained. "Current body armor used by the military can weigh up to 35 pounds, which is a lot of weight to carry around in a battle. Armor made of silk would be significantly lighter and stronger."

In addition to its uses as body armor, the silk could also be used to create stronger rope, parachutes or sutures. The company even approached Victoria's Secret to gauge the lingerie firm's interest in its new product.

Just as the silk has many potential uses, Pandiyan himself brings together a variety of different skills he has gained during his academic and business careers. Now completing his MEM degree, he previously earned an undergraduate degree from the University of Georgia in genetics and cellular biology, and then a master's degree in molecular cancer biology at Duke.

"While I was here working on cancer biology in medical center, I took the Invention to Application course taught by Barry Myers, and it opened up a whole new world for me," he recalls. Myers is the Anderson-Rupp Professor of Biomedical Engineering and director of Duke's Center for Entrepreneurship and Research Commercialization (CERC). "I started taking more business classes as my interest grew. Instead of focusing narrowly on a single subject, like I was in one area of cancer biology, the combination of science and business allowed me to look more broadly at the big picture."

In 2006, he was part of a team of MBA and PhD students that developed a business plan around a Duke faculty member's invention that subsequently formed the basis for the creation of Durham-based Neuroscience Pharmaceuticals. Also, as an intern in Duke's Office of Licensing and Ventures, he performed additional work for the company. Later, he worked as a student consultant along with a team of fellow MEM students on a practicum project for San Diego-based Protein Polymers Technology Inc.

All these experiences have given him a diverse set of skills and interests to succeed in the entrepreneurial world, he said.

"Gautham has some important traits to be a successful entrepreneur, but for me, the most telling is his attitude," Boyd said. "He is always upbeat and has a can-do sort of attitude in everything we've done together. I know I can count on him to be engaged and enthusiastic.

"He also has a good balance between passion and deliberate thoughtfulness," Boyd continued. "He has a really interesting intersection of skills that will take him a long way in whatever he decides to do. I know it's a challenging job market now, but if anyone is going to make it, it will be someone like Gautham."

He will finish his studies in September.