MEMP Student Makes the World Smaller, One Project at a Time

Keddy Chandran is no stranger to travel. As a child he moved several times to various locations throughout the US and Canada, and in his adult life has traveled to just about any part of the globe you can think of. In fact, he was traveling across Europe last summer when his Blackberry alerted him to an email announcing the Stanford Technology Venture Programs Fellowship for the Roundtable on Entrepreneurship Education. 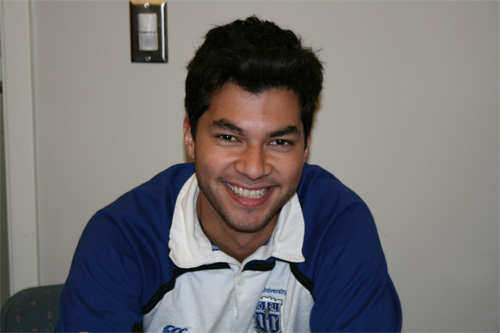 The challenge caught his eye for a number of reasons. First of all it was at Stanford, secondly the subject matter was food, and most importantly it involved entrepreneurship, one of his newly discovered passions. Keddy says he caught the entrepreneurship bug, from Dr. Larry Boyd, who taught t one of his MEM electives. Keddy spent the remainder of his European train rides completing the application for the challenge on his Blackberry.

Keddy was accepted into the program and began working with his team immediately via email. The team had to complete many challenges before stepping foot on the Stanford campus. One of the projects involved creating a meal using the teams collective skills, strengths, and experiences. The team decided to make a Jailbirds Last Meal, which included gazpacho topped with a key carved out of ice and crème brûlée, complete with a blow torch. Keddy said that by the time the team met at Stanford, they felt like they already knew each other.

During their time at Stanford, Keddy's team tackled a problem that he has faced several times during his travels; getting a good restaurant recommendation in a foreign place. Keddy said that he spent lots of time eating at Subway and Papa John's when he was in China, until he met up with a friend who lived there and showed him where to go and what to order. Although we can't all have a personal food guide wherever we go, the team did come up with a pretty great plan. The details of the solution that the team devised are top secret, but there is no doubt that their ideas will change the way that many of us eat while traveling.

Outside of the Stanford Technology Venture Programs Fellowship for the Roundtable on Entrepreneurship Education Keddy has done some other amazing things during his time in the MEM program. He, along with a team of students from across the university, has started a non-profit called Spinefuse. The company seeks to obtain unused inventory from large medical supply companies, like Johnson & Johnson or Medtronic, and to bring them to hospitals in developing countries. A trained surgeon then works with the local surgeons to teach them how to use the equipment in as little as four sessions. The team really believes in this cause because trauma is devastating and often fatal in countries that are not properly equipped to cope with it. Spinefuse has sought funding from the Engineering Alumni Council and hopes to compete in the Duke Start-Up Challenge and the Global Social Ventures Competition.

Keddy's global efforts don't stop there. Shortly after graduation, he plans to incorporate a venture group which will fund equal parts to a not-for-profit group as well as a for-profit group, with the for-profit group also contributing to the non-profit. He hopes that this symbiotic model will inspire people to give and to help them realize that giving doesn't have to be hard. When we asked Keddy what inspired him to put this venture together, he replied "If people just do it, they will find out that it is easy and rewarding. They just have to take that first step. The biggest problem that we face in this world is greed. People want to get a good return instead of doing good in the world. I believe that earning a good return and doing good aren't mutually exclusive."

Now that he has graduated, Keddy is trying to decide where to go from here. His ideas range from moving to China to learn Mandarin to working for Project Better Place, a company that is working to create an infrastructure for electric cars. He is also considering going into Clean Technology, after listening to author Thomas Friedman speak earlier this term. First things first though, his dad has planned an ice driving vacation in Sweden where the two Chandran men will spend three days driving various Mercedes vehicles on a specially "iced" track. The trip will be the perfect graduation present for this globetrotting engineer.