The Pertinence of MEMP in an Internship at the White House

I had the opportunity to interview Evan 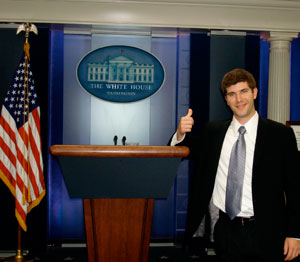 (MEMP Class of 2007) regarding his internship with the National Economic Council, where he worked in the Eisenhower Executive Office Building next‐door to the White House. Evan was one of about 120 interns working in the White House for various groups over the summer. Evan served under the Special Assistant to the President for Financial Markets and the Special Assistant to the President for Economic Policy (Housing & Technology policy). The National Economic Council is responsible for formulating and implementing the President's economic agenda and works with a variety of executive agencies, market participants and members of congress to address the most pressing issues in each sector of the economy. While discussing his internship, Evan noted the relevance of the skills he developed in the Master of Engineering Management program in the workplace.

Evan’s internship was an enriching learning experience. As he puts it, “Each day was different because there were a broad array of areas in which an intern could contribute to the body of work produced by the National Economic Council. I worked on financial markets, housing, and technology issues, so this involved a lot of economic research to make sure that we put the best plan in place to solve the major issues that arose in these three sectors of the economy.” One particular facet of the internship that surprised him was the amount of responsibility given to interns. “The interns, many of whom have attended graduate school, are expected to make significant contributions because, in general, there are only a few staff members who cover each sector of the economy.”

One point that really stood out to me while talking to Evan was his emphasis on something that the MEMP consistently teaches – the value of networking. With such frequent interaction with representatives from the industry during Career Fairs, TechConnect or after our Friday evening seminars, the value of establishing a contact with working professionals is immeasurable. Networking is not limited to industry professionals alone, there is immense value in building a good connection with faculty advisors and one’s peers.

The perfect example of this is the way Evan learned about the type of economic work conducted in the White House: “During the summer and fall of 2009, I began working as a research assistant for one of my professors who was a former member of the Council of Economic Advisors. My original impression of Washington DC was that it was a political town and there were not as many economic opportunities available, but my professor emphasized the important contributions that both the Council of Economic Advisors and the National Economic Council make to help the President formulate and implement his economic policies.”

There is a worthwhile lesson that all students should learn from this example – the need to actually reach out to one’s advisor and to discuss future plans. Unfortunately, this wonderful resource is something that a lot of students do not take advantage of. One needs to make the most of every opening and be prepared to go the extra mile to find something they are truly passionate about like Evan did.

According to Evan, another vital skill required for succeeding in the workplace is to achieve proper balance, which was especially important in the White House. “Working in the White House required that you balance between an intense focus on the near‐term priorities and the need to manage the longer‐term strategic aspects of implementing policies that can have a very positive impact on millions of Americans.”

When asked about the tradeoffs involved while making decisions on issues that could have strong proponents on opposite sides, he stated: “I tend to leave the politics of any given issue to the pundits or to the elected politicians themselves. My belief is that, as long as there is a fact‐based justification for a particular action, then I am less concerned about the politics surrounding a particular decision. It is sometimes the case where reasonable minds can arrive at different conclusions based on the same facts, which is why our democratic system is designed to balance these competing views.”

Another attribute that Evan stressed is the importance of teamwork. In this fast paced world, the significance of being a team player and collaborating with others cannot be emphasized enough. “The Duke MEM program taught me how to solve economic problems in a collaborative environment. This skill is necessary to succeed in the real world, but it is seldom taught in undergraduate engineering programs, even in the context of innovation – which is one of the priorities of the current administration.”

As the popular saying goes, “If everyone is moving forward together, then success takes care of itself.” It was remarkable to see how this quote was relevant in Evan’s tenure at the White House – “I was pleasantly surprised by how the National Economic Council is so lean and efficient. It is a small group of talented individuals that make the National Economic Council run and the collective volume of output generated by this group is what I was most impressed by.” A strong team also boosts individual performance and helps drive results – something Evan corroborates as he reflects on his own experience: “The fact that I had an opportunity to work on substantive issues with some of the smartest people in the country made it easy to maintain the high‐level of concentration and effort necessary to complete my slate of challenging assignments.” This is a valuable skill that all MEMP students need to hone in order to set themselves apart from everyone else.

It was really interesting to talk to Evan and gain an insight into some of the work that goes on in the White House. Evan thoroughly enjoyed his experience as is evident from what he said when asked to sum up his internship in a nutshell, “My experience with the National Economic Council was by far the most rewarding opportunity thus far in my career. Working within the Executive Office of the President was unique in the respect that we had the opportunity to have a positive impact the lives of millions of people with a single, carefully considered, decision.” What was also noteworthy was how relevant our MEMP education is in the real world. “Duke’s core economics training, focus on case‐based coursework, and efforts to bring in executives from different industries for seminars and workshops gives the MEMP students an enormous advantage over the competition.”